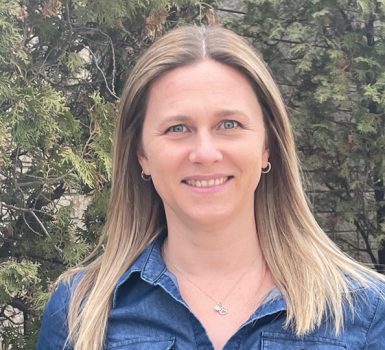 Kenzie Makowsky is a Registered Veterinary Technologist who joins the SaskSPCA with not only a background in veterinary knowledge, but also many years of experience in educational event planning.

During post-secondary training at Saskatchewan Polytechnic, Kenzie worked at the Saskatoon Zoo and in small-animal practice. Following graduation Kenzie stayed at the same small-animal hospital until 2002 when she moved to Yorkton to be closer to the family farm at Canora.

Although she took an extended maternity leave to raise her family, Kenzie maintained her registered status with her professional association and continued to do volunteer work in the community, including work with the Yorkton RCMP Community Cadet Corp.

In 2009, Kenzie moved back to Saskatoon where she took on the volunteer position of Conference Chairperson for the Saskatchewan Association of Veterinary Technologists (SAVT). This role evolved into a part-time paid position which she held until 2020.

In recent years, Kenzie has volunteered on the SAVT Continuing Education Committee, the Saskatchewan Animal Rescue Standards Working Group, and various other committees for her children’s activities.

In 2018, Kenzie decided it was time to get back into some hands-on animal care, so she signed on as a SCAT Street Cat Rescue bottle-baby foster. Since then, Kenzie and her family have fostered over 70 cats and kittens – and they’re proud to say they’ve only kept one!

Kenzie’s enthusiasm for organizing educational events, coupled with her passion for animal welfare has helped her easily transition into the newly created role of Education Coordinator with the SaskSPCA.

In addition to her love of animals, Kenzie’s interests include camping, travelling, and spending time with her family.