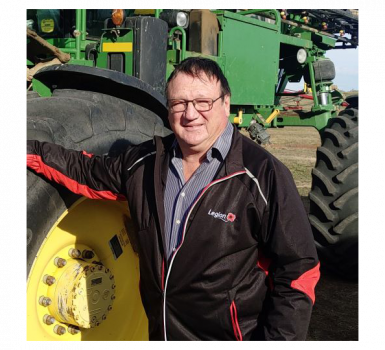 Les Trayhorne grew up on a farm at Greenan, SK, where his parents had cattle, horses, pigs, chickens, turkeys, cats, and dogs. He attended a one-room schoolhouse at Greenan, then finished his education at Elrose.

After serving as member of the Saskatoon Police Department from 1975-80, Les returned to farming. He and his wife Barb ran a cow-calf operation for 31 years. They are still involved in the grain side of farming, growing wheat, durum, lentils, mustard, and chickpeas. Summers are spent at the farm, helping their son, but they have bought a retirement home at Blackstrap Lake. They have four children and 10 grandchildren.

Les served on the Saskatchewan Mustard Development Commission and as a District Commander for the Royal Canadian Legion. He has also been a Legion member for 17 years.

Les worked as an Animal Protection Officer (APO) for the SaskSPCA for seven years. He explains that “it was the neglect and abuse that I observed as an APO that inspired me to let my name stand for the Board of Directors for the Saskatchewan SPCA. I am grateful for the opportunity to serve on this Board.”