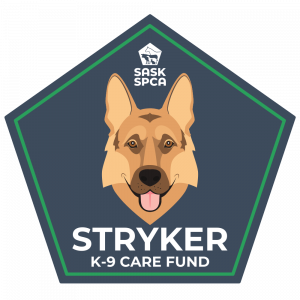 Police Service Dog (PSD) Daxa is a German Shepherd who served with the Prince Albert Police Service (PAPS) for five years. Daxa retired from the PAPS in 2018.

During her career, Daxa participated in the 2017 Canadian Police Canine Association K-9 Trials where she took first place in the tracking profile competition. Also in 2017, Daxa received the St. John Life Saving Award for assisting the RCMP in locating a missing person in frigid temperatures, along with the RCMP Commendation Award for, “going above and beyond on the call”. In 2018, Daxa was voted “Best Police Officer” in Prince Albert’s Best of the Best Awards.

During her five years on duty, Daxa was responsible for the apprehension of over 200 suspects.

In her retirement, Daxa has spent time playing with her favourite Kong ball and enjoying the occasional T-bone steak. On behalf of everyone at the SaskSPCA, we thank Daxa and her handler for their years of service with the Prince Albert Police Service.

About the Stryker K-9 Care Fund

The SaskSPCA’s Stryker K-9 Care Fund was established in 2015 to assist the owners of retired law enforcement dogs with the costs of routine and emergency veterinary care. The program is named after Police Service Dog (PSD) Stryker who served with the Saskatoon Police Service’s K-9 Unit. To learn more about the Stryker K-9 Care Fund, including how to apply for the program and how to make a donation, visit saskspca.ca/stryker.